Had the Chance to write a guest post the other day on the history of Ear Wax Removal. Check it out below!

Let’s face it, modern home wax removal tools aren’t all that great.  Earwax, which generally causes no issues for people and is the body’s response mechanism to keep the ear free from infection – bacterial or otherwise; is often best left alone. And a few drops of water may be enough to get rid of the blockage. Cerumen (ear wax) and sebum (all the oil, dead skin and dust that makes up ear wax), is actually quite useful – in small quantities. It is a natural cleanser, moving potentially dangerous bacteria from the inside of the ear canal to the outside, gathering dead skin cells, disconnected hair follicles and dirt along the way.

When the FDA issues a statement in 2010 specifically citing the “dangers,” of using ear candles, It became evident to anyone in need of ear wax blockage removal that this 5000 year old remedy was ineffective at best but more likely, as the FDA states, “dangerous” to use.  In conjunction, cotton swabs became regulated and must have a warning on their packaging, specifically stating that they are not to be used in the ear.  In response to these revelations that traditional ear wax removal products are dangerous,, the rise of the at-home ear irrigation devices began like a rocket shooting towards the moon.  Appearing approximately 8 years ago, irrigation sray bottles that utilize pressurization to pump a stream of water into the ear, began flooding the market.  These tools mimic, at a fraction of the cost, the same devices that are used in the offices of audiologists and ENT specialists. In the span of a few short years, these devices overtook the earwax removal market and became the go to remedy for at-home ear wax removal.

As an absolute game-changer in the world of ear wax removal tools, a small (quiet) revolution was happening for ear health products.  Unfortunately, this perfect storm of demand and innovation created a big problem; a more dangerous problem than cotton swabs and ear candles appeared in the form of cheap, made in China  tips.  These thin, tube-like tips quickly and easily disconnect from the irrigation device and dislodge in the ear, causing trips to the emergency room to have them removed.  This cost and the potential long term damage done to the ear canal, vasty outweigh the cost savings of purchasing an at-home ear wax removal kit.

And if it could get any worse. The answer to these cheap dangerous tips was to start selling dangerous, expensive tips, ones that emulate the tips you find in an audiologist’s office. Now don’t get me wrong, these tips are absolutely fantastic for an audiologist who is a skilled professional in all things Ears. But these tips are made of rigid silicone and, in the hands of a non-professional, can be easily over-inserted and can damage the sensitive parts of the ear canal. Not the kind of ear wax removal tool you want to put in your ear.

The Purpose of Earwax

Earwax helps keep your ears lubricated and prevents water from entering your ear canal. It also prevents dust and microorganisms from getting into your ears. Earwax naturally weakens and falls out of the ears over time, so most people generally don’t have to worry about removing it.

At blueechocare.com, you will find a full range of ear wax removal tool kits.

Don’t use any small objects to clean your ears

As we noted earlier, doctors don’t recommend using anything smaller than an cotton swab to clean the ears. The reason for this is that small objects, even semi-soft ones such as cotton swabs, can easily puncture the eardrum. The eardrums are easy to pierce because only a thin membrane of skin protects them.  Devices that are currently marketed as safe for ear wax removal include metal ear currettes.

A common way to safely clean your ears involves using an ear wax softener. You can buy an ear wax softener kit at your local pharmacy. The kit usually uses carbamide peroxide or hydrogen peroxide to soften the wax. Follow package directions to soften and remove earwax. If you have any questions about which earwax softener you should use, definitely ask your doctor.  IT’s never worth the risk of your ear health if you’re unsure.

Side effects of Excessive Earwax

But for many people, particularly the elderly and small children, earwax growth and development can become excessive. An ear canal clogged with earwax can cause ear pain, infections, and other problems. If earwax gets stuck in a certain way, it can cause coughing by stimulating the branch of the vagus nerve that innervates the outer ear. And, not surprisingly, excess earwax can lead to some hearing loss.

There are at-home options for irrigation that are safe.  For example, the Cleanse Right line of at-home ear wax removal devices includes safety tips designed specifically to stop over-insertion from occurring.  The tips for these devices have a safety splash disk that won’t allow the tips to go past the first segment of the inner ear.

Why Do You Need To Remove Earwax?

Some people may need to remove earwax if they have an excessive buildup, also known as a blockage. Blockage often occurs in people who use headphones frequently, wear hearing aids daily, wear earplugs at night, or have more rapid buildup of earwax than the average person.

Earwax buildup can affect hearing and cause pain, so it’s important to remove it in a safe and effective way. Here are some tips on how to safely clean your ears.

Yes, but the proper device needs to be utilized or else at-home ear wax removal can be dangerous.  The majority of ear drops and devices are made in China and are NOT regulated by the Food and Drug Administration, which means there is no warranty that what you get in is on the ingredient list and there is no guarantee you’ll get a product that’s gone through rigorous testing. That’s why it’s important to purchase ear wax removal devices from companies like Blue Echo Care, who is ISO 13485 certified (the highest FDA recognized standard certification for medical devices) and have developed their products with the guidance of professional audiologists.

HOW TO USE AN AT-HOME EAR WAX REMOVAL IRRIGATION DEVICE?

In general, ear wax removal devices, particularly irrigation devices, are easy to use.  Below is an outline of the basic instructions:

2 Use the irrigation bottle to spray 5-10 times into the ear to completely remove the earwax.

3 Be sure to use a basin by placing it under your ear to catch the splashes.

4 Use picks to remove any remaining stubborn wax.

5 A syringe with a rubber bulb can be used to gently remove excess fluid from the ear.

NOTE: If you have ear pain, dizziness or an ear infection, please consult a physician immediately.  At-home ear wax is for blockages that are causing discomfort and mild hearing loss.  Your hearing and your ears are important and seeking medical aid is critical if you’re having anything beyond mild symptoms. 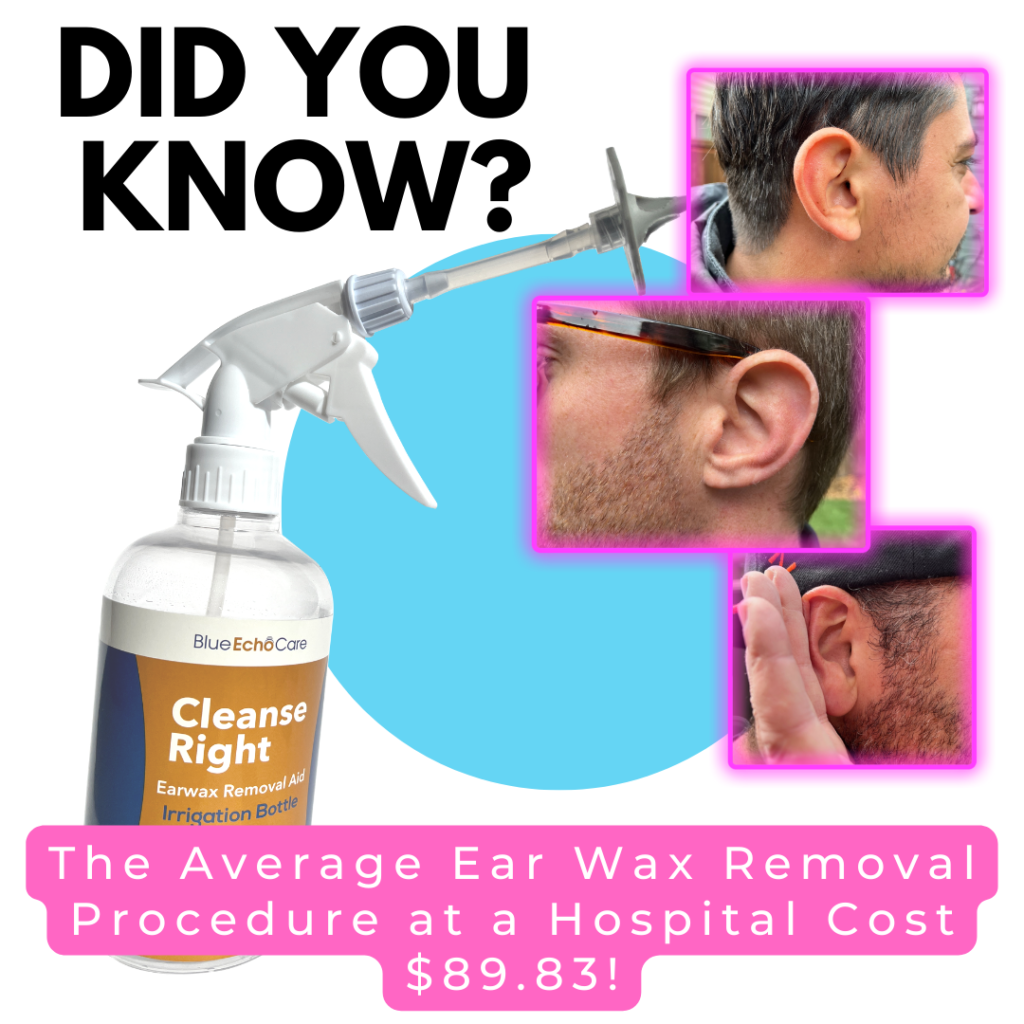 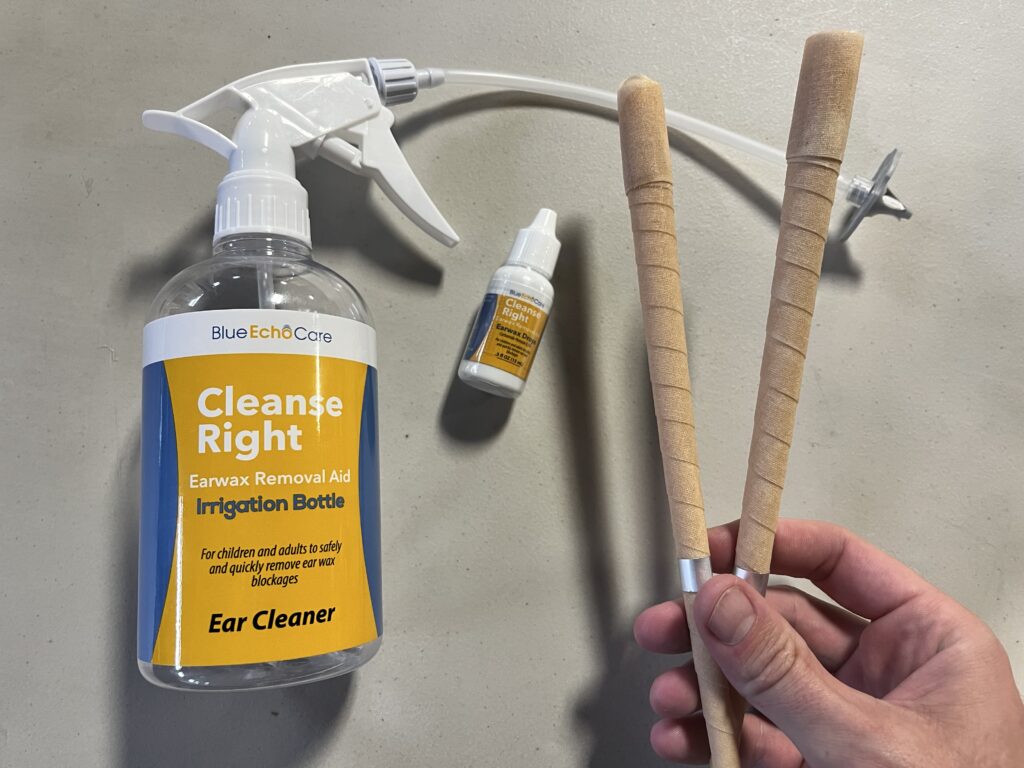